True crime has and continues to explode in popularity every passing day, a potent mix of high drama, suspense and too-wild-to-be-true antics that leave you breathless when done right, and horrified when done wrong (but not in the correct way). Helter Skelter, along with Truman Capote’s In Cold Blood, is often seen as one of the texts that kicked this whole sub-genre off, the moment people saw more strange and intriguing stories in the real crimes around them than in fiction. How could they not think so, with Charles Manson being the central mysterious figure, the man who threatened the world with an apocalyptic war (the titular Helter Skelter), the ‘logic’ of which he uses being so confused and detailed in its mania there’s no use repeating it here. If you want to understand the madness of the abyss, you’ll have to look deep within this book.

For those of you not in the know, Charles Manson ran a cult called The Family in the desert outside Los Angeles, a cult that partook in kidnapping, torture, murder and other horrific offences. The group were eventually brought to trial and Charles Manson himself found guilty of numerous crimes that say him sent to prison for life, dying there in 2017. This book, co-written by the chief prosecutor Vincent Bugliosi, details the history and beliefs of The Family, what Manson’s philosophy was, and how their actions in the summer of 1969 changed not just Hollywood but all of Western society. The madness was all consuming, and it began what many people see as the decline of trust between individuals, the moment when people started to lock their doors and call their children in off the streets after dark.

There are so many moments that will make you go “What? Surely not!” whilst reading this you’ll start to wonder if the book itself came from a deranged mind. How can so much madness and terror surround a group of small fanatics camping out in the desert, often with nothing more between them than the clothes on their backs and the drugs in their veins. At times a little confusing (there are a lot of names and faces to remember), but with a helpful glossary and ‘character profiles’ included to keep you up to speed, you should find the story a riveting one.

Keep in mind, this is not a happy tale, and though justice is served and The Family itself is no more, the damage done both physically and ideologically by Manson and his followers has left an ugly scar on the world. The man may be gone, but the twisted and racist worldview he created is still employed by far too many people today. 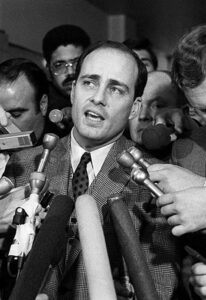 Vincent Bugliosi co-wrote Helter Skelter with history writer Curt Gentry in 1974. The Manson trial came to be known as one of the most sensational and controversial court cases of the 20th century.