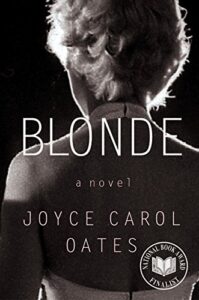 Marilyn Monroe is one of the most instantly recognisable people who has ever lived. The ice-coloured hair, perfect skin, big eyes and bigger smile, she’s so iconic, that a real argument could be made about trademarking her face. This rather callous disregard of her as a product rather than a person is what pushes the core issues in Blonde, Joyce Carol Oates’ lengthy ballad to the doomed starlet and her kaleidoscopic life. Hollywood is hell in this story, and Norma Jean Baker (Marilyn’s real name) is tormented by jealous lovers and studio executives with hyena faces, tongues lolling after her shapely figure.

We follow Marilyn’s entire life, from her small beginnings in a tiny Los Angeles apartment dominated by her paranoid mother and a photograph of a famous actor (identity unknown) we are told is her father, through her triumphs as an actress, and the inevitable heartbreaks that follow. Whilst romantic love plays a large part in her life, it is the love of her adoring fans that speaks most to Norma, as she tries desperately to fill something that’s missing in her life by living in the roles she plays. Whatever piece is missing is up to the reader to decide. Do we really need to know? Regardless, this is a woman who has everything, and yet seems unable to hold onto any of it. 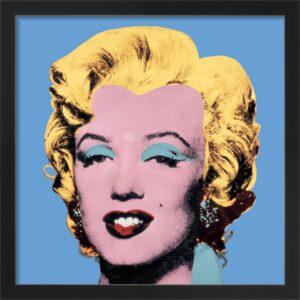 Oates writes short chapters that fracture the story along multiple points of view, sometimes giving us the same events from contrasting angles. We see actions through the eyes of Marilyn, her lovers, husbands, fans, reporters and down the barrel of a sniper rifle, pointed at her delicate head without anyone’s knowledge but our own. Oates wants us to see Norma Jean in the paradoxical light celebrity creates, as both the mysterious queen who controls her kingdom, and lost princess running around after her who’s desperate to make things right. When you’re the centre of the universe and everyone looks to you for guidance, who can you ask for help?

If there’s a downside it’s also one of the book’s strengths. The detail of description is both a joy to roll around in and a slog to wade through, sometimes slipping from page-turner to snail’s pace within the same paragraph. The uncertainty of Norma’s life is what makes us care for her, but it also takes too long to get to the end and realise what a large part of the meaning all is. I think you could easily slice 150 pages from this tome and still have a weighty, highly insightful examination of the poison at the heart of superstardom.

It’s soon to be adapted into a film by Netflix with Andrew Dominik directing (Mindhunter, The Assassination of Jesse James by the Coward Robert Ford) and it looks set to be a faithful and satisfying adaptation of this beautifully sad novel. Before it comes out, make sure to read the story of Norma Jean Baker, and how her life was changed and cursed forever by celebrity.

Joyce Carol Oates has been writing for decades, and has published over 50 novels and dozens of short story collections. Blonde is one of her longest and most personal works, and explores a period of time Oates lived through and has always remained fascinated with, the Swinging 60s.