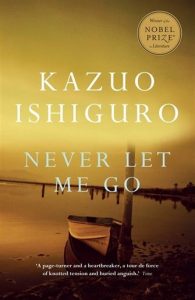 It’s often said that being a stranger to a place makes you more aware of it than those who have always been there. You see the cracks in floor and walls, but you also appreciate the beauty a whole lot more. That definitely seems to be what’s happened with Kazuo Ishiguro, the Japanese-born but English-raised novelist, who in 2017 was awarded the Nobel Prize for Literature, as a writer “who, in novels of great emotional force, has uncovered the abyss beneath our illusory sense of connection with the world.” Ishiguro understands England and English people as few other authors can, and he’s clearly held in high esteem by the literary community and his peers. But does he stand up to Find Digs’ rigorous scrutiny?

I can safely say that Never Let Me Go is a masterpiece of fiction. There’s something unbelievably gentle about the story, specifically in the sections where it should turn depressing and even horrific. The story is about Kathy H, a young woman who reflects on her friendships with Tommy and Ruth, and how all three of them were raised and chose to live through their early twenties. At first their lives appear idyllic; they live in wondrous, Enid Blyton-like school, seem perfectly content to have only each other and no parents, and get given an allowance to live as they please in their youth, though they are continually reminded that doing any damage to their bodies (smoking, drinking, etc) is the absolute worst thing that they can do. 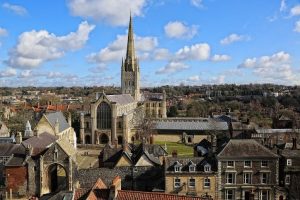 Many major plot points take place in Norwich and the surrounding countryside.

When a new teacher arrives however, a shocking revelation is made, one that upsets the balance and changes how the characters, and the reader, view their lives for the rest of the narrative. What’s remarkable about Never is that this sudden shift doesn’t derail the story or make you question what characters have been doing until now, like it might in so many other authors’ hands. Instead, it makes you appreciate the writing a whole lot more, and draw parallels between it and real life, with the lies we tell ourselves in order to feel better. Climate change isn’t really the end of the world. I’m sure if I keep doing the same job forever, things are bound to get better.

Talking about the plot without ruining it is difficult, so instead I want to focus on the narrator, Kathy. She is one of the best drawn narrators I have ever read, masking the truth of her world behind her perception of it, just as any real person does when they tell you their side of things. She faces her situation not with anger and shouting, but with a resigned and quietly devastating acceptance that will melt the toughest readers. It’s how I imagine a lot of people living under a tyranny must feel, unable to stand up and express themselves, but holding onto those feelings in their hearts and minds, burning away with suppressed anger.

There’s a well-made film of Never that I accidentally watched at ten years old, far too young to understand what it meant. It scared the living daylights out of me, and it was only years later when I read the book and revisited the film that I realised, there was beauty in that fear. The ability for it conjure up a world that was startling not by how removed it was, but by how real and possible it all felt. This novel is Black Mirror in a Henrik Ibsen play, and as weird and off-putting as that might sound, if you have a beating heart and soul you’re going to love it! 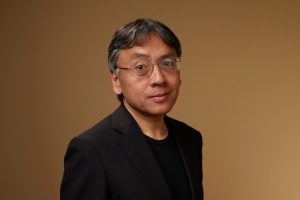 Kazuo Ishiguro was born in Nagasaki in 1954. In 1983 he renounced his Japanese citizenship and became a full citizen of the UK. His 1989 novel The Remains of the Day won the Man Booker Prize.