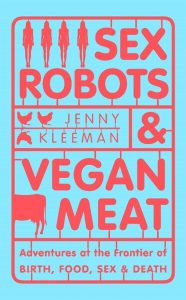 This time we delve into the near-future with Jenny Kleeman’s exploration of the surreal science happening on the fringes of Silicon Valley. She encounters groups of inventors and researchers trying to push the envelope on how we create meat (grown in labs), find our ideal partners (swap them for robots), give birth (test-tubes instead of wombs) and ultimately die painlessly (Though these projects seem bizarre and even dangerous, Kleeman makes it very clear to us, these aren’t just ideas. They’re products which will likely be rolling out in the next few years and will swiftly become an everyday part of our lives.

A key component Kleeman focuses on is choice. Specifically, the choices the creators make when pursuing their goals, and the choices we as consumers will soon be faced with. Situations which ten years ago wouldn’t have seemed possible are suddenly made very real by this book. Is the scientist who plans to eradicate painful, slow deaths with the click of a button justified in creating a movement of fans to join him, or is he a monster, capitalising on their desperation? The reader is left to ponder these questions, though Kleeman pulls no punches in saying what she thinks.

I wonder if this book might have been better served as a series of articles, instead of four long, at times unwieldy sections that have little to connect them beyond Kleeman’s subtle scepticism. There are interesting ideas and arresting descriptions of scientific encounters (the arrogance of many of the people interviewed is bewildering at times), but the whole is definitely less than the sum of its parts. 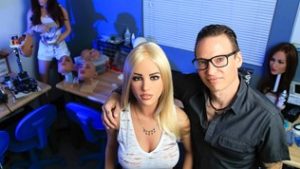 One of the titular robots, ready for shipping.

Kleeman innovatively brings to light not just the ethics of these new inventions, but also whether the problems they claim to solve should be fixed by exterior forces as opposed to interior motivation and change. It’s refreshing to read someone who sees the inherent good in people but who isn’t afraid to call out the hypocrites and charlatans when she thinks that’s what they are. We should expect great things from her in the future, particularly as we head into the Brave New World she’s been kind enough to open the door and welcome us inside to. 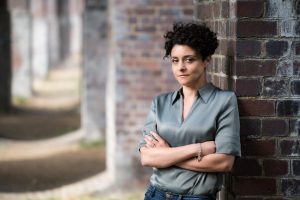 Jenny Kleeman has worked as journalist for both Channel 4 and the BBC, and regularly writes for The Guardian and Vice News. Sex Robots & Vegan Meat is her first book.